Noah was just 6 years old when he was diagnosed with Type 1 diabetes.  Just beginning first grade, he now had to learn about carb counting, insulin, and diabetes in addition to what other kids his age were learning in school.

Diabetes is hard on a young boy, just starting “real school”.  He felt different than the other kids.  The kids in school suddenly stopped inviting him to birthday parties and social events because they were afraid he couldn’t eat the same stuff they could or play the same way they could.

In early 2010, Noah decided he was going to change the way people thought about diabetes, starting with his own community.  He decided he was tired of how people treated him because they didn’t understand his disease, not just other kids, but people in general.  There were times when he would check his sugar or have an insulin shot at a restaurant and people would stare at him.  He didn’t want another kid with diabetes to feel the same way he did so he came home one day and asked if his parents could purchase blue lawn flamingos for him.  His parents said sure but couldn’t understand why he wanted blue ones.  Noah said he wanted blue ones because not only were they the color of diabetes awareness, but they would certainly stand out enough on people’s lawns enough to make neighbors start asking questions.  His parents agreed and purchased as many blue flamingos as they could.

Noah started his awareness program by naming each and every one of his blue flamingos with a “D” name for diabetes.  He attached a short note to each one explaining what life is like for a child with diabetes.  Noah then asked people if they would take a picture of them with his flamingo, email it to him, and if they were in a position to, to make a small donation to the American Diabetes Association on behalf of his awareness program.  The weeks to follow were nothing but amazing.  Noah raised more than $2000 in less than two weeks for the American Diabetes Association, and he was suddenly getting calls from people asking if he could send his flamingos to another family, not only locally, but in other states as well.

Noah was thrilled to accommodate his new friends in his community who now understood a little bit about what he was going through.  By the end of 2010, Noah had a flamingo in every state in the United States and his flamingos even started “flocking” overseas to various countries around the world.  Noah was soon getting emails from people all over the world thanking him for helping them or their child to have a way to communicate with their neighbors, friends, and communities about this disease that they shared.

In July of 2010, Noah was lucky enough to meet Bret Michaels when he was visiting Massachusetts.  Noah, his parents, and his sister attended a concert and met with Bret after the concert on his tour bus to give him a flamingo that he named Darwin.  Noah was thrilled to learn that Bret was diagnosed at the same age as Noah and went through a lot of the same things that he did.  It was so comforting to know that someone as famous as Bret took time out of his busy schedule to speak with Noah and let him know that he was not alone in this world living with his diabetes.

Over the years, Noah continued his journey spreading awareness to people about diabetes and has given speeches at countless corporations, meetings, and even with congress about his disease.  He went on tour around the United States to speak with children at diabetes camps about what he has gone through and to inspire them to get out there and do what they can to raise awareness of their disease  and that one person can, in fact, make a difference in this world.

While kids would often come up to Noah and tell him that they were inspired by him, Noah was inspired by them as well.  While Noah has done quite a bit in his life at the age of now 12, he has always wanted to do one thing, which was to attend a diabetes camp as a camper, not Noah “The Diabetes Dude”, to give a speech, but just a simple kid with diabetes.  He knows that attending a diabetes camp will allow him to make friends that will last a lifetime, friends that he can trust, friends who just “get it”.

Noah is thrilled that this year, Bret Michaels, has offered to cover the cost for Noah to attend a diabetes camp and make that dream for him happen.  Noah and his family cannot thank you enough, Mr. Michaels, for your compassion and generosity!  It is appreciated more than you will ever know! 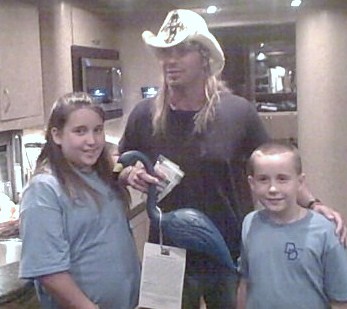