This is a story about my son Chris. He is 14 years old. Chris was diagnosed
when he was nine years old – January 4, 2008. We were so lucky that our doctor
picked up on the signs and got the help Chris needed right away. Chris was in the
hospital for five days. My husband and I were in a state of shock yet put on a
brave face and learned as much as we could about Type 1 Diabetes. Chris is such an
awesome kid!! One night in the hospital I was on my laptop researching Type 1 and
saw Camp Midicha.

I was so excited that the camp Chris had gone to Day Camp is the
same Camp where Camp Midicha is!!  I signed him up for Camp – because Chris was nine he had to go to the overnight Camp. Chris was nervous about staying overnight for the week but went anyway. Chris had a BLAST and was so happy he went!! That was five years ago. The last four years Chris went for both sessions. He LOVES Camp.

To be able to be with kids with Type 1 is so awesome!!! He learned how to put his
pump site on his legs last summer – which was huge!!

Chris is in the SuperMan shirt. He has had the greatest Counselors at Camp throughout the years and hopes to be a Counselor when he is older at Camp Midicha in Fenton Michigan. Midicha – Michigan Diabetes Chapter… 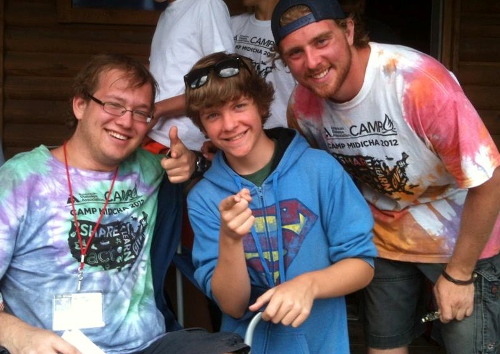 The Life Rocks Foundation supports “Rock & Read” to encourage children to read by making it fun and rockin’!

I just had to share these pictures with you! This week at our at our
elementary school we had a special week called “Rock and Read!” We had a
day to dress up as rockstars and this is how one of my kindergarten kids
came to school!!! She sure knows how to make points with me (her
teacher!) We also had a door decorating contest and our door won! We
decorated our door with the words…Reading is “Nothin’ But a Good Time”!

Your influence “Goes That Far”…..love it! 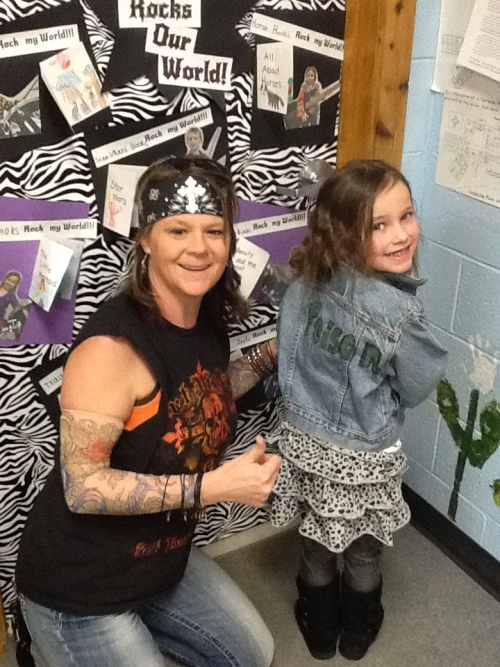 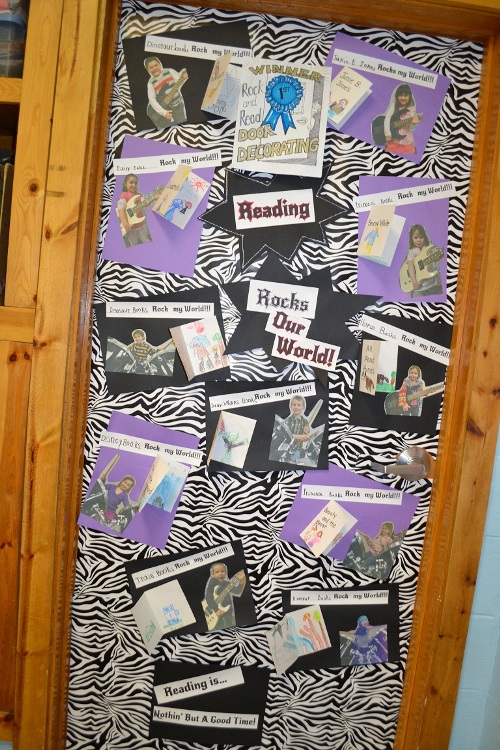 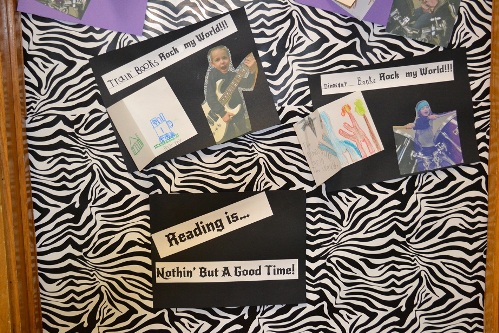 Like you, I too like had a huge life/death experience. I got a 1 in 1 million rare sarcoma at my collar bone last October. It took me months to recover but now I am cancer free 11 months. I FINALLY got the pleasure of meeting you at your show in Ocean City, Md. on Sept. 22nd. What an honor & inspiration it was to meet you & talk for a few minutes about our health scares! You are an incredible advocate for so many causes. You have escaped death more than once like me recently. Keep rockin’, you are one beautiful man inside & out. Stay close to those gorgeous daughters & enjoy life WITH THEM as much as possible. The world needs your caring & generosity. You are one in a million!

Thanks for the hat & signing my jeans! Stay happy & healthy.

Until we meet again, 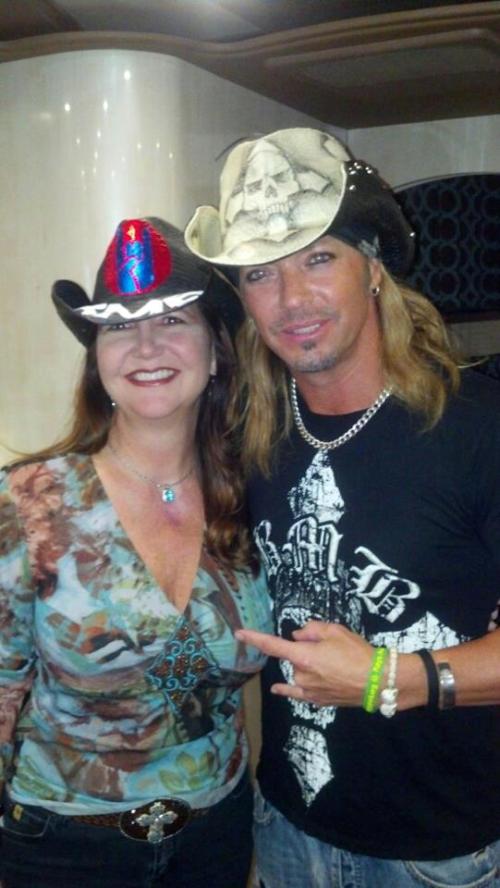 Raise your hands, rejoice and rock  as if there is no tomorrow!!!

Click HERE to watch a video collage of awesome kids helped and sent to diabetes camp by Bret Michaels’ Life Rocks Foundation. If you would like to donate to continue to help sending children living with diabetes to camp, continue to the fight against childhood and other forms of cancer, support the Wounded Warrior Project or various pet charities please click HERE.

Thank you for continued support! 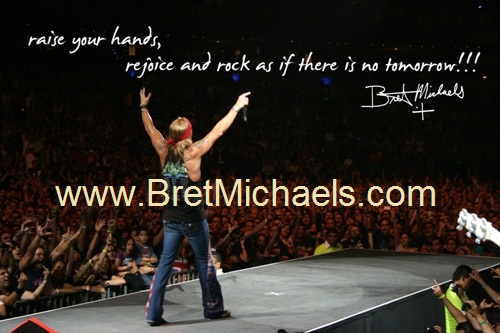 Visit BretMichaels.TV to watch an exclusive, touching and powerful video of an individual helped the Bret Michaels’ Life Rocks Foundation who looked to music to help heal.

A year ago, our son, Carson (Type 1 Diabetic since age 4), had the amazing
opportunity to meet Bret on his 5th birthday on November 5. Bret and the entire
Bret Michaels group made quite an impression on Carson and our entire family.
Carson continues to talk about Bret and has said that one of the things he wants to
do when he gets older is be a rockstar! He still continues to say “Bret Michaels
and I are going to STOP diabetes!”

So, for his 6th birthday which was last Saturday, November 5, we decided to get him
a cowboy hat like the one Bret was wearing when Carson met him. He was ecstatic
when he opened the gift! He also has a Steelers jersey because they are Bret’s
favorite team. He had to also wear his bracelets just like Bret! Carson is now
asking when he will get an electric guitar!!!!!

I have included two pictures of Carson wearing his hat and jersey along with the
picture of Bret and Carson when the met a year ago.

Bret is Carson’s HERO and IDOL! What an impression he has made on him and our
entire family!

Keep on doing what you are and thanks for all you do!! It means so much to these
young Type 1 diabetics and their families!! 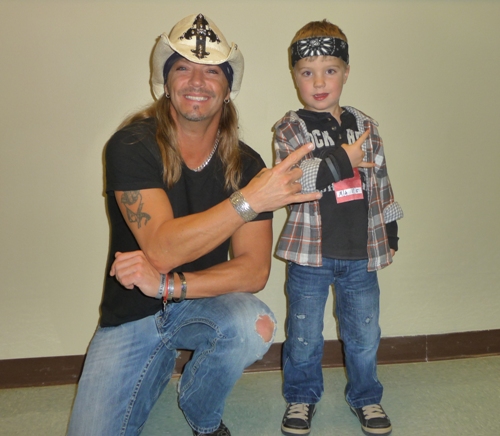 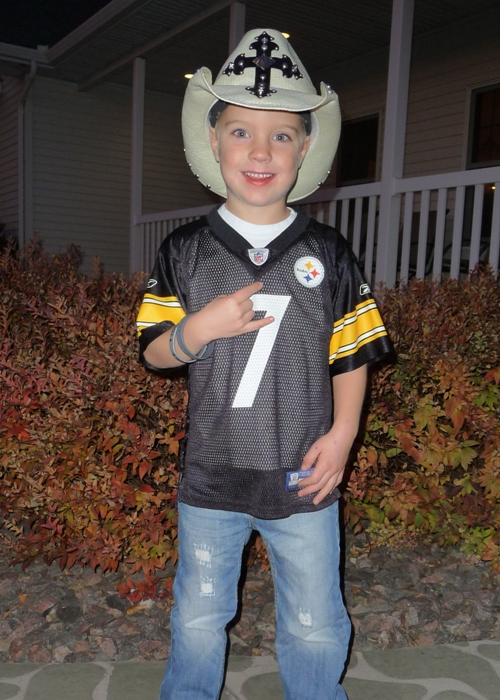 I have just come across this site and I wanted to say THANK YOU for the attention you have brought to this disease. My son Branson is 9 and he was diagnosed at age 5. He is truly my hero , until last summer he was racing motocross only to quit to play football. He has never used diabetes as an excuse to quit anything, he is a straight A student and is wise beyond his years. Through this he has taught me to live, strive for life and fight for love. Myself along with some other awesome women here in Alabama have started a support group Type I Diabetics of Mobile Bay. Our goal is to help educate, offer resources and link families and kids together to know there not alone in this fight. We meet once a month , and always working on raising awareness and money to help with either finding a cure or sponsoring kids for camp . If we can make a difference in one child’s life to let them see how normal a life they can live then we’ve done our job. As a parent it’s scary to know what we’ve been through and what we still might face in the future but through my sons love, and faith , and strength he is my armor in life . Thank you Bret, you are a true inspiration and help so many people out with your Life Rocks Foundation. 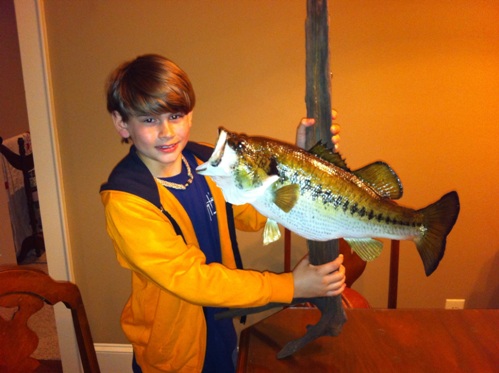 Our daughter Rachel has been a diabetic for 25 years now and unfortunately, it has taken a toll on her body. She is blind, in kidney failure, on dialysis and lost half of her left leg due to this horrible disease. Last summer, Rachel had the honor and privilege to meet Bret and Patrick at his concert and had the time of her life. Not to long ago, Rachel was in the hospital and received a very special call from Bret and Patrick. They gave her so much hope and inspiration while in the hospital. When the nurse came in Rachel told her, I just talked to Bret Michaels and she just laughed at Rachel. She was very upset about that (she didn’t believe Rachel) Rachel then said.. It’s ok. I don’t care if she believes me or not.

Bret and Patrick always keep in touch with Rachel to see how she is doing. Both of them are very special to our family. We cant thank Bret enough for all that he does for JDRF and ADA. It gives so many people so much hope for a better future and Rachel say’s she doesn’t feel so alone, when dealing with this disease. Rachel is always saying ” Bret’s got my back ” and we will find a cure one day. God bless you Bret and Patrick for being such special friends to Rachel. 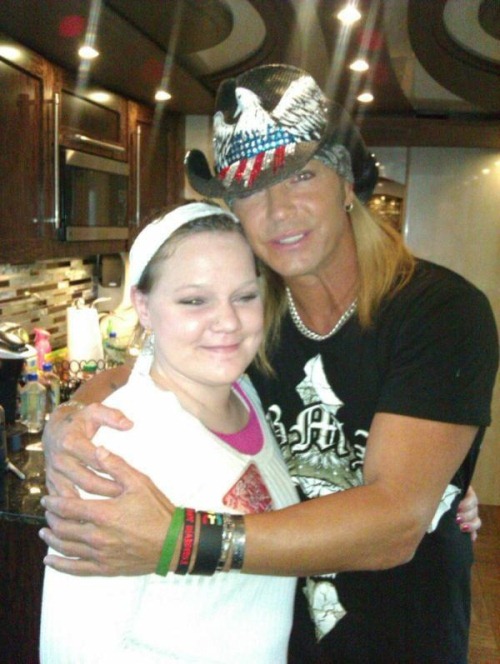