I have been a fan of Bret Michaels for as long as I can remember but what I didn’t know was just how many of my life experiences he could relate to or what an inspirational person he would become for me. Even several years later when I had an opportunity to see Bret Michaels live (twice in fact, once in 2003 and again in 2006 I believe) at Burlington Steamboat Days, I still had no idea. The only thing I was aware of at that time was what an amazing show Bret put on.

Fast forward to the year 2010 and the show Celebrity Apprentice because this is when I learned that Mr. Michaels was also a type 1 diabetic and an individual who had certainly faced (and would continue to stare down) his fair share of adversity. It was in those moments captured on TV that I realized that all the time I had spent in the hospital, all of the struggles I had gone through to try and maintain a “normal” way of life were important events – they made me who I am and helped me grow in and develop further that same fighting spirit which Mr. Michaels possesses.

While my diabetes, along with its’ side effects continue to be a daily struggle for me, I have also been blessed in many ways. I have always had an incredibly supportive family. I have made countless friends in the 12 years that I have been ballroom dancing, a hobby I picked up to maintain a healthy lifestyle. In fact, my best friend and now, husband, is a man that I met while out dancing. He was in the Navy Reserves when we first met. Given both our family histories with military service, we decided to marry on Veteran’s Day of 2011. He brought four incredible children (he was previously married) into my life – a gift of kids that I had given up on long ago since control of my diabetes has always been more than difficult and doctors had warned against it because of the inherent increased risks involved.

Recently, I was given an opportunity to meet Mr. Michaels when he was doing a meet and greet for his Pets Rock collection at a local PetSmart where I live. He was so positive and caring and took the time to visit with both me and my husband (who became disabled in a random accident in 2012). I don’t think I even have the words to express how much those moments reignited our determination to live life to its fullest, to remember every day to grow in some way, and to use our struggles as fuel to help others. Mr. Michaels’ personal ties to JDRF and Operation Homefront also personally touch us.

Thank you Mr. Michaels and Team Bret Michaels for everything you do to raise awareness for these organizations! You make a difference for countless individuals every day and no amount of thanks can express the gratitude my husband and I feel for all you do. 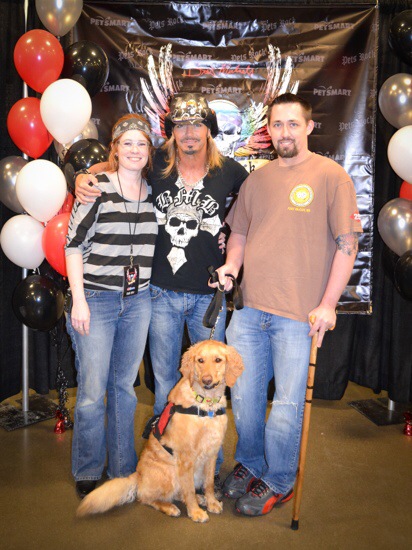