I’d like to share my beautiful story regarding how Bret Michaels provided me with strength, inspiration, and true compassion. I was married to my absolute best friend and soul mate, Heather Ramsey. Our second date took place at a concert where no other then Bret Michaels performed. We had both been long time fans of his music. It was an amazing evening and Heather and I had the awesome experience of seeing him perform. Of course, we saved our ticket stubs. Heather and I were promptly married a few short months later. Our friendship, love, and family grew into something I never thought was possible. Tragedy struck on August 14th 2013 (her son Kyler’s 18th birthday) when we first learned she had cancer. Our worlds would never be the same. She battled the horrible beast and every day she slowly deteriorated into a mere shell of a human. I bought tickets to go see Bret Michaels much earlier for the show on March 9, 2014…just hoping Heather would have the strength to see him one last time. Although she fought hard, she passed March 4, 2014…just days prior to us being able to have that experience of seeing Mr. Michaels together again. I was destroyed…I still am and always will be. I decided I would not go to the show. After much convincing, my buddies Rob Flores and Rudy Ornelas convinced me at the last minute to attend…that it would help me mentally. Of course, it was an amazing show. It was nice to be able to “feel” again. After the show Rob and Rudy motioned me over to the souvenir table. A gentleman stated Rob and Rudy had shared that my wife had just passed and expressed his deepest sympathies. He said I should go over to the end of the table and “talk to that guy”. I looked over and that guy was Robi Wylde!! The keyboardist for the Bret Michaels band! I couldn’t believe it. I walked over and he shook my hand and asked about my wife. As it was extremely loud from all the screaming fans he escorted us back into the theater and asked about us. He was impressed we had all served in the military and now in law enforcement. He even thanked US! He began to ask more questions about my beautiful soul mate. He proceeded to take us backstage where we had the amazing opportunity to meet many of the hard working stage hands and the other band members! They were all so laid back and I couldn’t believe we were having this experience. As the night progressed they spent close to an hour just talking with us. As time had come for us to go home Robi said, “Hold on…one more person wants to meet you”. I honestly wasn’t expecting ANYTHING as I was already so amazed we had such an awesome evening. He escorted us down a couple stairs to a door. The door opened and it was none other than Mr. Bret Michaels. I entered the room and emotion flooded over me. I began to cry uncontrollably. All I could think of was how much Heather had made this amazing evening happen. Without hesitation Bret reached out…and hugged me. He held me like I was his brother and he had known me his whole life…and I cried uncontrollably. I realized that this was the first time I truly let it all out. I had spent all week being strong for our 4 kids, being strong for her mother, being strong making funeral arrangements and all the million other things I had to be strong for. For the first time…I felt I could just be emotional and cry. I tried to regain my composure and Bret asked, “Can I please have the pleasure of knowing your wife’s name?” I was immediately impressed with how genuine he was…he really cared about MY feelings…little old Scott Ramsey. I responded emotionally but very proudly, “Heather”. I told him she had just passed a few days prior to cancer and showed him her picture. Bret actually became teary eyed as I shared that our second date was at his performance years prior. Bret Michaels became emotional as I shared my very personal story. He didn’t say things would get better. He didn’t say time heals all wounds. He just let me cry, share my experience, and was TRULY GENUINE. He hugged me again and asked what he could do for ME! I asked him if he could please sign Heather’s ticket stub from years prior. He stated, “It would be my absolute honor”. We took some great pictures and once again, he hugged me. Here I was with THE Bret Michaels…the man that can have anything and everything he wants at the snap of his fingers (heck, we’ve all seen Rock of Love!) but he was taking time out of his very busy schedule to listen to my story and comfort me. I couldn’t, and still can’t, grasp how human and down to earth he was. No words can express how GENUINE and COMPASSIONATE Bret was. It was an absolute amazing and more importantly, therapeutic experience for me. Although she wasn’t able to see him again our story with Bret Michaels had come full circle. Bret Michaels is the most genuine, compassionate person I have encountered in many years. Him spending that time with me and truly listening to my story, sharing some emotion, and him just hugging me like a brother speaks volumes to what an amazing human being he is. His character has inspired me to, not only get out of bed in the morning, but to try and inspire people the way he has inspired and motivated me. You see…it wasn’t the rock star Bret Michaels that “rocked my world”…it was the amazing character and true soul of Bret Michaels that “gave me something to believe in”. Words can’t express how much he saved me! 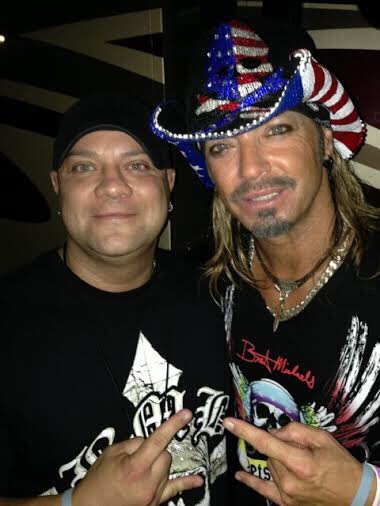