I know it seems like a LONG story but I need you to know what a difference watching you take the stage despite diabetes has made for my son. Hoping to catch you this summer as you come our way.

After a whirlwind diagnosis of Type 1 diabetes for my then 5 year old son, I headed back across Lake Champlain knowing our lives had just changed forever. Wondering how on Earth I was going to manage this crazy disease. Being a single mom, how was I going to work, give him the care he needed and provide the guidance for my just turning into a teen daughter (which I am convinced should also be considered a disease)?

All these questions running through my head and I hadn’t even walked through my front door yet. Being a nurse, I was well aware of all the complications people with diabetes can face. I knew how scary it could be to see a patient be admitted due to poor outcomes. All this was weighing heavily on my mind as I thought about his future. He was only 5, this was crazy. Little did I know in 9 short years he would be leading the way down the new challenge?

After the first insulin shot at home, which was an epic success despite the need to sit on the floor with my son in a “therapeutic hold” while my daughter laid across our dog who wanted to eat me because he was sure I was hurting his boy and my son screaming at the top of his lungs not to do it, life took on a new normal. A normal that worked for us, a normal that would bring us to a better future. Yes, he was diagnosed but we would all fight it together, as a family. The same way we had faced every other challenge so far. I knew if I wanted him to be successful with this, it would be fought head on, by everyone around him. And we have. Family walk teams, educational events in the community, lobbying congress, talking with student nurses about life with type one and starting random conversations with people at airports when test strips fall out of their pockets.

Already an athlete when he was diagnosed, he was determined to try so many other sports. New sports now meant learning how the activities would affect his body, his insulin, his performance. As a mom, my first concern was how to manage his diabetes, for him, it has always been how to win. He left soccer and hockey behind and began his pursuit of basketball and baseball. Spending his down time on the ice or climbing mountains. I have watched him pitch in Cooperstown and take his skill on the court to the state level in Syracuse for a free throw competition. Nothing slows him down. He has come off the mound after shutting down the other batters, excited about his pitching and shouting “and I’m pretty sure I am low, I can’t see the batters.” Knowing I would quickly help him get back to a stable level to play for the next inning. Diabetes was no match for him.

In my efforts to build a confident man, I think I have created a monster. We have checked blood sugars high in the trees on a ropes course, on top of the high peaks in New York, skid boarding on the beach in Maine and standing in the crowd of concerts in Saratoga. He knows there is nothing he cannot do with diabetes. He knows he can go wherever he wants in life, despite diabetes. He has seen Bret take the stage on TV, Kris take the cross country course at the Olympics and many others succeed despite this crazy diagnosis. So he knows life is limitless.

Because of this, he has selected his next challenge, a 100 mile bike ride. ALL IN ONE DAY. This time, I am along for the ride, like it or not. Once again, we will attach a challenge as a family. Last summer he decided he wanted to complete this ride. 100 miles, on bicycle, in Vermont, all in one day. Since it is a fundraiser for JDRF, how can I say no? Already involved with the great organization, I know the benefits of the research that is done with the money we will raise. I have no doubt he will attack this ride like he has every other challenge before him.
Me, the nurse, the baseball watcher, the bleacher warmer? Not so sure I am ready for the challenge. Did I mention I am lazy? That I do not exercise? That we each have to raise $2000 to ride? That I am old? No? Well, let me tell you they are all true. But I have a great inspiration and the one thing that will push me forward, my desire to find a cure. So we will be fundraising our foolish heads off, we will be asking friends and family to sponsor us, holding dart tournaments, raffles and bottle drives. We will do this.

He has inspired me to do more than I thought I could do. To reach for bigger things. To change my life. I will be there, riding with my son, who at 14 has repeatedly shown diabetes he will conquer it. I will ride with him, to because of him, because he NEVER gets to stop battling diabetes.

Thanks for continuing to inspire more kids to never stop. 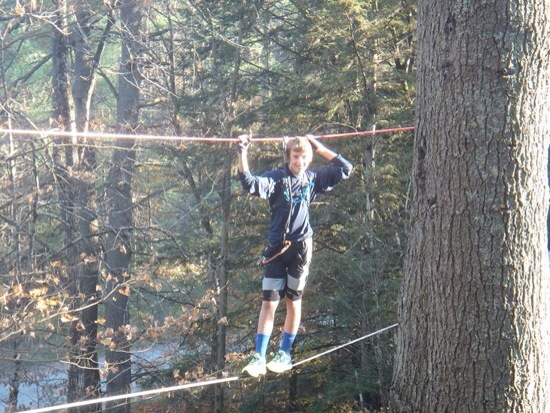