My son Gage has dealt with health challenges all his life. His first stay in the hospital was at 9 month old. He been hospitalized about twice a year up until he was 7 years old. Finally we got answers why Gage would become so sick. He was diagnosed with Adrenal Hyperplasia. His body does not produce enough of the stress hormone cortisol. He now takes hydrocortisone to make up for what his body does not make. We were so excited when we made it just over a year without him being hospitalized.

On November 30th 2010, Gage became very sick and it came on quickly. He had complained of stomach pain and it was followed by vomiting. Within 3 hours Gage became very weak, pale and lifeless. I knew from the way he looked and the sound of his breathing this was different than the times before when he became so sick. He was taken by ambulance to the ER. Within 20 minutes we were told Gage was in DKA and he was Type 1 Diabetic. The doctor looked me in the eye and said “if he did not come by ambulance he would have been in a coma or might not have made it.”

Fast forward three years later Gage is a strong boy beating 2 major illnesses. He has never let it stop him. He plays baseball and loves to run. He has spoken in front of colleges students, high schools, the Rotary,live radio and has even been on the local news twice spreading awareness about Type 1 Diabetes. He is a Junior Ambassador for the JDRF. He brings Backpacks of Hope to newly diagnosed T1D children.

Gage has dream of someday getting a Diabetic Alert Dog to help him be more independent. He even wrote a book and has published it called “Gage’s New Friend”. The money raised will help make his dream come true. You can help support Gage by purchasing a copy of “Gage’s New Friend” on Amazon.com and LIKE Gage’s New Friend on Facebook.

So proud of my son for living life to the fullest. 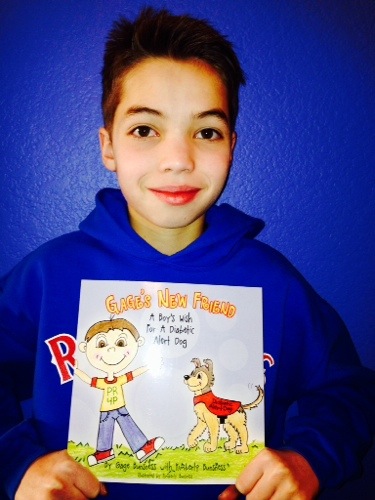