I will never forget the words that came out of my doctors mouth “What are you doing here? your son is dying” A few days before we had gone to the doctor to figure out what was wrong with my son. He was 18 months and a very sick little boy. He was peeing so much and drinking enough water for the whole family. He started to be sick every time he ate and the mood swings were out of this world. I knew it was Diabetes, It was purely mothers instinct. The day before I had to fight with the doctor to fill out a requisition to get blood work for Logan. He finally did and said “no news is good news” I carried on with my day and took Logan for blood work. The next day I had not heard anything from the office so I took Logan out for lunch to Dairy Queen. He had a kids meal and a kids ice cream. The Doctors office was right near the Dairy Queen so I thought I would go and just double check the results. All I was thinking was no news is good news, but something was not sitting right with me. As the nurse put us into the room, I would never have thought that I would hear the words I did…..”YOUR SON IS DYING” The fear I felt would be like nothing else I would ever feel. The doctor told me I had to rush him to the hospital and hurry. I was not even allowed to go get him pj’s. Everything became such a blur. When getting to the hospital I was finally told that Logan has DIABETES. All the questions started to come. My poor little boy’s blood sugar was at 52.5(Canadian results should be anywhere from 4-8). The nurses couldn’t believe that he was running around playing just like any other little boy. We then spent a week in the hospital, There is nothing in this world that would prepare me for what happened next. The doctor that we had was not educated enough to be our doctor and the other doctor had to many patients. The first thing we had to do was learn how to give him his insulin. The nurses made us “practice” on HIM with saline in his tummy. The pain that we put him through was not necessary at all but we had no idea. As far as we new this is how you have to learn. This was the easy part for us. The Doctor would order him food that was enough for a grown man to eat. Remember he is 18 months old. Logan loved to eat so we didn’t have a problem with him eating until they made us force feed him until the food was gone. My baby would puke after dinner all the time. After a few days of this I knew this was not right. About day 3 in the hospital I was sitting with Logan and the doctor came in to tell me that I gave him Diabetes and if i would have taken better care of myself while i was pregnant he would never have to go through this. Right after those words were said to me I knew that this doctor was crazy. I stood up and told him to never EVER come back to this room again. He said that’s fine and tried to discharge us from the hospital. He said that ” we would not be able to go to a diabetes clinic for another year and good luck taking care of our son” That weekend an angel came to us. her name was Dr. Robinson She took one look at us and sent us to the diabetes clinic the next day. She was the BEST thing that ever happened to us. We finally got the care we needed to get Logan back to his normal blood sugars and to be a healthy little boy again. As of today he is 9 years old and doing very well. I have learned so much from my son and am so proud of the boy he has become. He asks me why? why me mom? I simply tell him its because ” you are the strongest boy I know and you can handle anything that comes your way son!” The best thing I can pass on from my story is ALWAYS go with your gut request, demand anything you have to do! 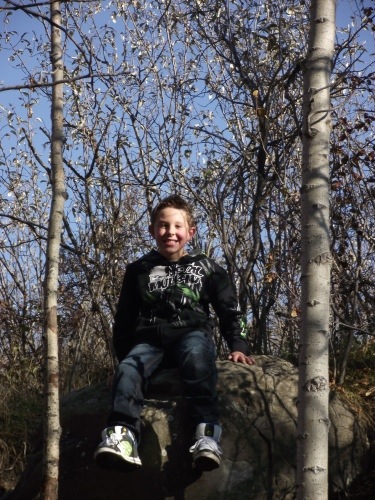