I just have to share this! It is an amazing story of how we are all connected to help one another through. I had posted previously thanking Bret after my friend Diane and I met him in Obetz, Ohio and then again 1 month later in Orlando, Florida. Here is the chain reaction that took place… My childhood friend, Diane and I were reunited after many years. She was diagnosed with bone cancer in her arm and had a successful surgery and to celebrate, we met Bret in August. Bret had given Diane a guitar pick for each of her children and when he asked me if I had any, I did my usual sad, “No”. Little did he know that my husband and I had suffered many pregnancy losses and had been unable to become pregnant. Bret gave me one guitar pick for myself and one for our “baby to come” when I told him we were still trying. It was so sweet and gave me some hope. One month later, Diane and I took a road trip together from Ohio to Florida to meet him again at the Hard Rock in Orlando. This time, I had given him a necklace as a small token of my thanks for his kindness. He was so sweet to wear it for the show. When we got home to Ohio, I sent in my story and many thanks to Bret. I revealed more about the repeated pregnancy losses we had been through to explain why Bret’s kindness meant so much to my broken heart. It was posted on his website and I, in turn, posted the link on Facebook. An old friend of mine from high school who doesn’t spend a lot of time on Facebook happened to see my link and wasn’t going to read it. She said she just felt a tug that she should. When she did, she learned about our losses and shared her story of loss with me. She invited me over to celebrate October 15th, “Pregnancy and Infant Loss Awareness Day” with her and others who had also struggled with losses. There is a world-wide “Wave of Light” each year as parents who have lost their babies light candles for each of their little angels. I went and connected with some beautiful ladies who were so supportive. From this experience, I gained a referral to a specialist. With much encouragement from these new friends, my husband and I had our appointment with the doctor and now have a plan to try starting our family again! I can’t wait to give my child their guitar pick from Bret and tell them about how many people helped to bring them into the world. It amazes me how we are all connected and how small the world really is. We are all meant to help one another and those things in our lives that are so tragic may actually help someone else through their struggles. Cancer is tragic, yet it is what brought two friends to reconnect and fulfill their dreams from childhood of meeting Bret. His struggles in life have made him so aware of others and made his heart so huge! We were so touched by his kindness to us after briefly sharing our struggles. He is amazing to his fans and when we sent in messages, they were posted on his site. Because of those posts, people reached out to one another to help, support, and love us through things. In our case, it led to finding just the right doctor to help with an issue that had us in complete despair. Now we have hope again. Bret, you are such a huge piece to my puzzle! You are an angel! No joke, if we are able to have a baby, that child is going to be named after you somehow! How cool would it be if he/she shared a birthday with us? Yes, we are both March 15th babies me and you! I have to tell you, now that we have met you twice, as silly as this sounds, I miss you like a friend that I haven’t seen in a while! LOL! If you are ever coming through Columbus, Ohio, come see us at the veterinary hospital I work at and do some loving on some doggies and kitties! 🙂 Many thanks again for your care of others! This world is broken and some are called to be a light in the darkness! What a brilliant light you are! 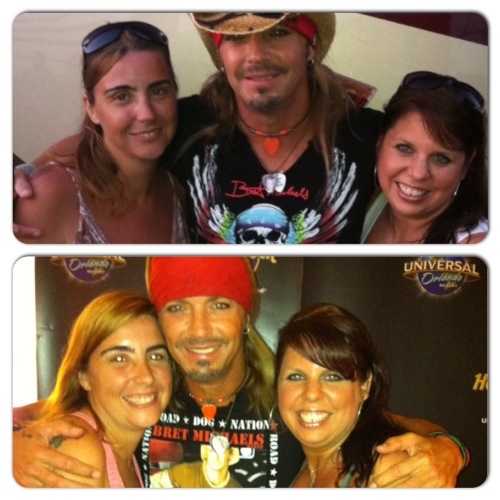