In January 2012, we started giving my 5 year old son an allowance for doing simple chores around the house. He receives $5 per week but has to put at least $1 into an enveloped labeled “giving back to others” and at least $1 into an enveloped labeled “savings for me”. Max $3 in his wallet each week. We wanted to start teaching lessons around philanthropy early in life to our boys.

Once he started accumulating some money in his “giving back to others” envelope, I started talking to him about different organizations to contribute his money – how animals need help, children and adults who are sick or may not have a place to live, etc. It took him awhile to figure out what he wanted to do, and continued to save his dollars.

In June of 2013, he finally decided he’d like to donate his money to The Children’s Museum of Phoenix – it was at about $75 at this point.

The museum was so impressed by his generosity, they invited him to speak at their annual Leadership Luncheon where Susan Crites-Price was the keynote speaker. She authored a book called “The Giving Family: Raising Our Children to Help Others”. The museum thought it was a perfect opportunity to share his story.

He was more than happy to do this, having just turned 7 years old at the time of the luncheon, he was very excited to speak into a real microphone. I did a lot of the talking and he chimed in where we planned. He was asked a couple of questions and answered them honestly and confidently. His main reason for choosing The Children’s Museum of Phoenix? For the museum to open up more exhibits. At the luncheon we learned that he is the youngest contributor to the museum!

Although it wasn’t his choice to save the money, we are very proud of him for making the choice on his own of where he wanted to send his money and for speaking so confidently at a luncheon full of adults. 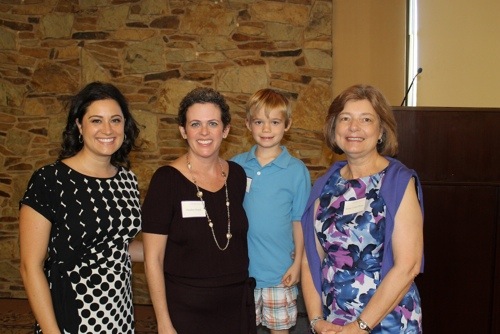