I am sharing my story to raise awareness for brain aneurysms, silent killers that many do not know about and are misdiagnosed as sinus infections and migraines. In 2006 my headaches changed so I had a MRA. I was diagnosed with my first brain aneurysm and a few weeks later had brain surgery in order to clip it to help prevent a rupture. After a year of recovery I ws able to return to work. Fatigue and headaches were daily but functionable. In April of 2009 I had a stroke at work caused by my second aneurysm. The next day a follow up scan was done at a Boston hospital and they confirmed my second brain aneurysm along with finding a third on the opposite side. I had two brain surgeries to clip them with four weeks time. During my third surgery a fourth was found and clipped. I was told the fourth one grew fast and would have ruptured with weeks if not found. Due to two weeks of dizziness I was scanned and my fifth aneurysm was found and surgery was done to place a clip on it to reinforce it. Three weeks later I was in the emergency room due to a slight headache and unusual pressure. Within 30 minutes we were waiting for the MedFlight to fly me to my surgeon for emergency surgery because the recently clipped aneurysm was leaking. Looking back I can now giggle because just hours prior I was sitting in my surgeons office being told I was doing wonderful. It happens so fast, without notice. In 2011 I was getting checked and they found the sixth brain aneurysm! It was hiding behind one of my others. As I sat there listening to how I had to go through yet another brain surgery I’m told its more dangerous because I’ve already had so many. With each surgery things become more complicated. On top of it all I’m informed I also have two more aneurysms!!! These other two aren’t in my brain they are in my carotid artery behind my left eye and cannot be reinforced right now. In Oct of 2011 I had my sixth one clipped.things haven’t been the same, but they are not bad. I no longer can work, go a day without needing a nap and need help doing things I thought I’d always do on my own. I am grateful to be here. So happy they were diagnosed prior to rupture. Adjusting to my new normal. So many die from these silent killers, people of all ages. No notice, signs that are common signs if so many other “normal” diagnosis. Please research if you have read this and want to know more. 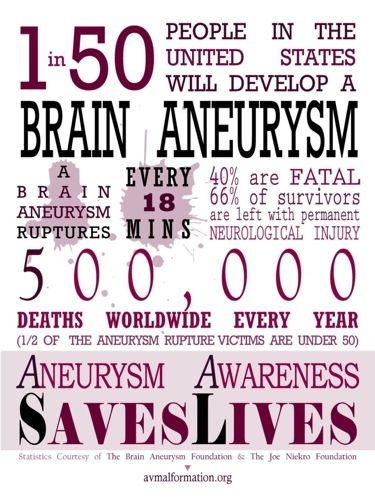