On July 6, 2013, My friend who is a huge Bret Michaels fan found out the he was having a concert at a festival in Arlington Heights, Illinois and insisted that we go. So we got a babysitter for our children and off to the concert. My daughter Alyssa was upset that she was not going since she is also a big fan of Bret Michaels. She watched him on celebrity apprentice. She was amazed on his commitment to raising money for diabetes, since she has been a diabetic since 16 months of age (who now is 11 years old). My friend kept telling me that we will meet Bret tonight. I was ok, whatever, but she was determined. At the end of the concert, Bret auctioned off items to raise money to send children with diabetes to camp. We watched three items get auctioned off for a lot of money, and as a mother, I was very taken back again how much money Bret has raised for diabetes.

After the auction, we went near the back stage in hopes of meeting Bret Michaels. We ran into the guy that bought the hat of Bret for a large amount of money. So my friend went up the guy and thanked him for buying the hat. She told him that it was going to a great cause and told him about my daughter Alyssa and her situation about being a diabetic and how she loves to go to camp. Then I introduced myself and also thanked him, because I to as a parent of a diabetic appreciate the chance to get a break for one week and knowing that my daughter is safe is priceless. My friend asked the guy if he would take me to meet Bret (if bought an auction item you got to meet and greet) to thanks him for all that he has done and the guy did not hesitate. During our wait to meet Bret, the guy said that that was going to introduce me and that I had a story to tell and the guy did just that. So I introduced myself to Bret and told him about my daughter Alyssa and thanked him for what he has done and does for diabetes, and Bret then offered to pay for my daughter diabetes camp for this year and next year. I was in shock and could not believe his generosity. Not only did I get to meet Bret, but also received an amazing gift as well. Diabetes camp is extremely expensive and almost impossible to send my daughter to, so with this gift, it truly makes a difference in my daughter’s life, but mine as well. Not to mention the positive impact it has on Alyssa. I’m also very grateful to my wonderful friend that made this happen.

Thank you from the bottom of our hearts 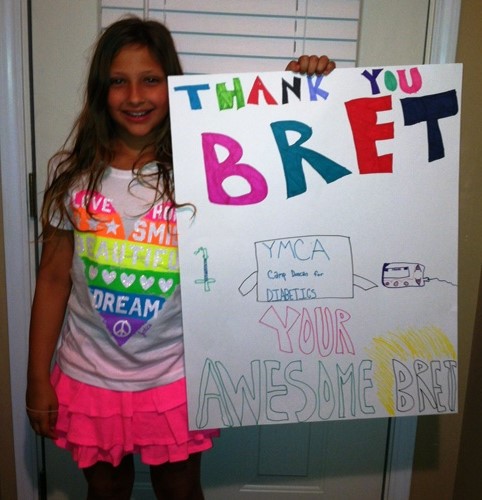