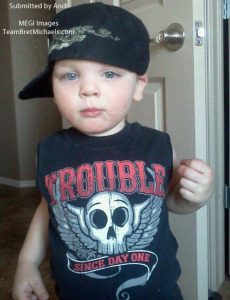 My sweet little Callan was diagnosed with Type 1 Diabetes on October 6, 2011. He was only 2 years old.

His only symptom was excessive urination. He was literally soaking through his diapers in minutes. I tried calling his pediatrician, and they were closed for the day. I took him to an urgent care that refused our insurance. I ALMOST waited until the next day to take him to his pediatrician. I’m so glad I didn’t!

I took him to the ER. He was running around, and playing .. like a completely normal 2 year old. The drs laughed at me for bringing him in, and told me that I was overreacting and that I should just take him home. I insisted that they do at least a blood panel to make sure everything was okay. The dr PROMISED me that it would all come back negative.

About 30 mins later, that same dr walks in and very nonchalantly says “Well, he has diabetes. His blood sugar is 1102, and he is in DKA.” They mediflighted him to a better hospital, and he was in the picu for 2 days, and we were released 2 days after that.

Since then he has had 5800 finger pokes, 2154 injections, and 100 site changes!! He rarely cries or complains. When people stare at him he speaks up and says “I have diabebes, my pancreas is broken.” He is actually proud to be Type 1!