Thanks so much for sponsoring my son Kenden for diabetes camp again this year, he attended camp UTADA here in Utah. He was somewhat nervous about going again, but when we picked him up he was all smiles. All the other children that he met there all hugged him goodbye. I have never met such amazing loving children. Once again he has met some friends for life. We got to listen to all the camp stories for days. including all the new diabetes education he learned while he was there. The camp has been a true blessing for Kenden, he wants to become a camp counselor when he is a little bit older. I have sent in some pictures the one picture is Kenden and all the things he was given at camp, once again we thank you for the gift of camp. 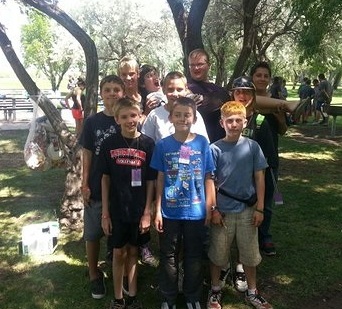 I cannot thank you enough. There aren’t enough words to describe the gratitude we
feel toward you for sending our daughter to diabetes camp. In the month before camp, Lauren (9 y o) was in what I call a “dark place about her having diabetes”. Many tears were shred about her denial or rejection of T1. She was diagnosed at 3 1/2 years old. She is in a school with no other T1’s . 360 days a year she stands out. The 5 days at Camp she fits in and is just like everyone else.

Lauren came home from camp, energized, refreshed, feeling GREAT about having T1.
Being surrounded with other children “just like her” brings new life to her soul. The experience of diabetes camp is a lifetime of joy and belonging. Thank you.

Thank you for putting life back in my daughters eyes. 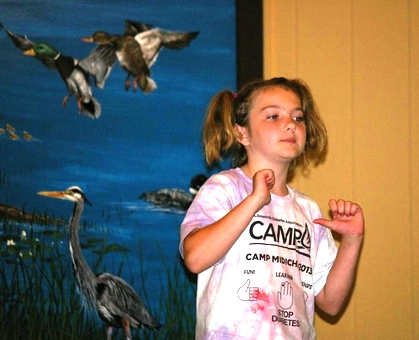 My daughter Mikayla was able to attend diabetes summer camp due to your generous scholarship from the Bret Michaels Foundations. Diagnosed at 6, Mikayla is almost 9 and dealing with Type I diabetes on a daily basis. She is extremely happy at diabetes camp where she is “like the rest”, feels safe and can be the active and energetic near 9 year old you see in the pictures. I also volunteer as a Registered Dietitian for the week at camp and I love overseeing snacks and lunches for over 50 kids!!! I would love to devote my profession to teaching type I kids about managing the diabetes through nutrition! It’s all about the diet, isn’t it? But funding is difficult to come by. 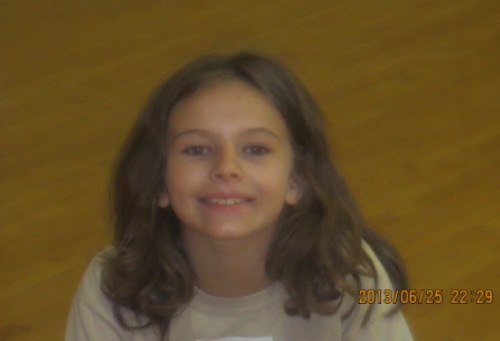 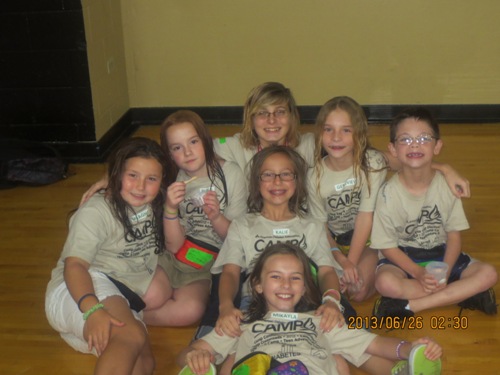 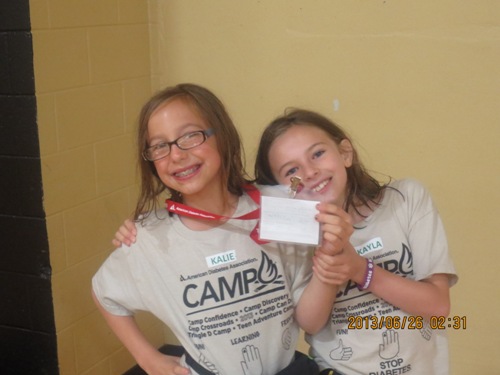 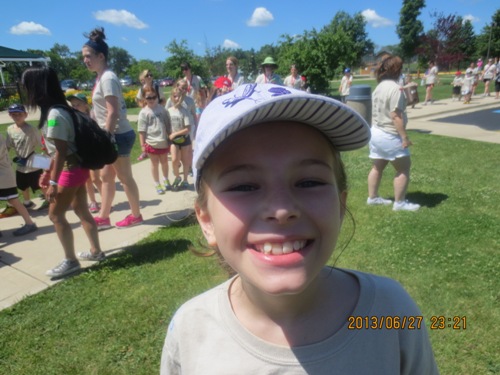 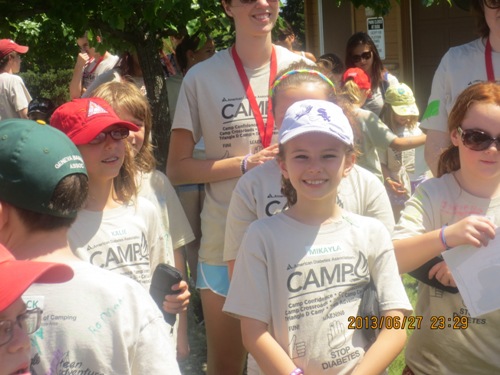 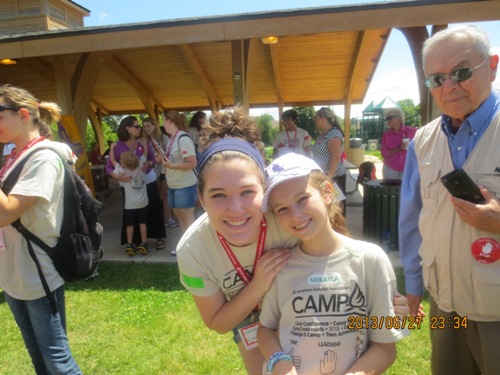 My name is Jessica Babcock. I am 16 years old and am writing in hopes you will help my moms dream come true. She is a HUGE Bret Michaels fan-she has seen him 6x all over the place including Tampa FL where she was in the frontrow!

I write because my mom is a young widow. My dad John died a few years ago from a massive heart attack, we found him collapsed in our bathroom where he hit his head. He was in good health and just passed a physical for his job. He had no health conditions. My mom has since raised my sister Belle (age 10 now) and I all alone. She has been my best friend and is the most patient understanding person. I developed severe PTSD after my dad’s death and have many Drs appts. My dad used to take my mom to Bret concerts!

Then shortly after his passing my cousin, my mom’s nephew PFC Michael Demarsico was killed in Afghanastan- (8/16/12) he was just 21. He stepped on an IED. My mom kept the family together – controlled the media and was the family rock. I know my dad is with Michael now. At the Bret Michaels concert the following weekend she cried through the entire set when Bret kept talking about our soldiers.

Through this all my mom has NEVER complained. I do hear her cry at night a lot, but she never shows it to anyone. My mom is a dance teacher and she just started a program for special ed children to dance! She just worked with a teen with MS – she choreographed a special dance from a chair – the entire audience was crying and on their feet. She gives to the community and kids- she also directs theater and works with children who can’t afford to participate and does it for free. My mom is amazing.

I would really like to make my mom’s dream come true and take her to a Bret Michaels concert. She NEVER does anything for herself it is always about my sister and I. This would put a smile on her face – even if just for 1 night.

I don’t even know where to begin with thanking you and Bret for last night.
I had such an amazing time meeting Bret and enjoying the concert. Bret
seemed to really like my little one Belle right from the moment he saw her
while he was performing – he picked her right out while we were backstage.
She thought it was great he called her sweet baby and waved to her on stage
while we were on the side of the stage and then shook her hand. But of
course it was the after the show meet and greet that was just unbeatable.

People always say what you see on television is always fake, but not with
Bret, he is truly genuine and the conversation we had was sincere and just
overwhelming. I feel like a burden has been lifted off my shoulders. We talked about many things and my daughter captured some photos that are just amazing you can see the passion in his eyes to know he really means what he says. He talked to Jessie about her letter as well. He then told Belle she reminded her of Jorga! And gave her a special guitar pick from his pocket. She was so excited. He of course signed the photos we brought, which I had taken in Tampa Florida at Busch Gardens (which he loved and asked me to send to you. He signed my Bret Michaels Doll, drum stick (from Tampa) and show poster. He was just patient and kind.

Patrick- you have been outstanding dealing with my daughter and I during
this. You are to be commended. You have really made my dream come true. I
know you mentioned wanting to share some of this on the website, you do have
my permission to use what you would like. I am just so impressed with Bret,
you and his entire company and the level of professionalism. I have been
sharing it all over facebook (I have thousands of followers due to my dance
teaching and theater company so I am getting lots of comments and positive
likes!!!) I am attaching some photos of Bret with the girls and I from
last night! 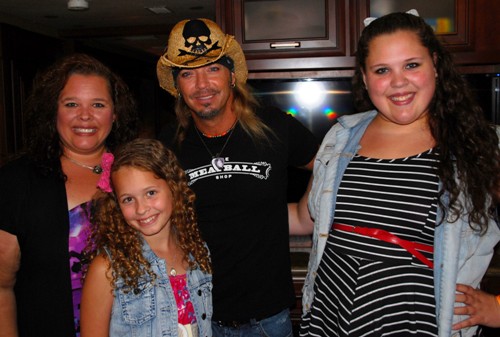 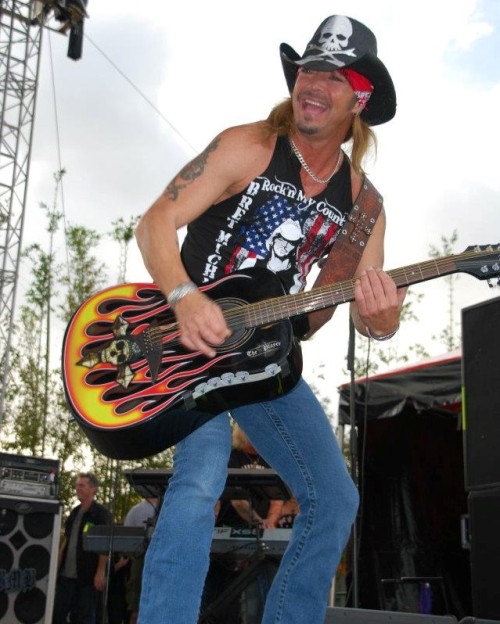 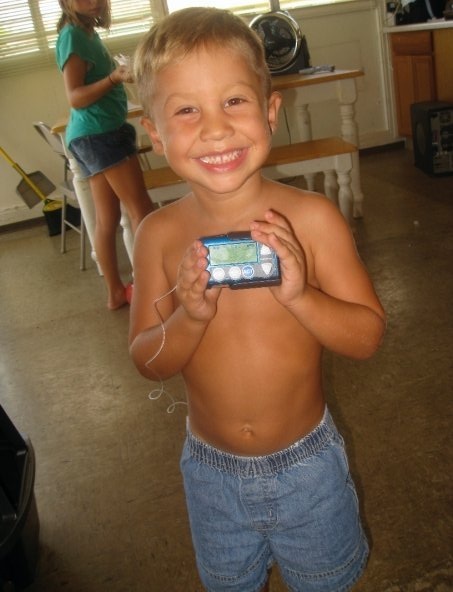 Check out this awesome poster from Marley, a child Bret and the Life Rocks Foundation sent to diabetes summer camp. The poster describes all the fun things she did at camp! 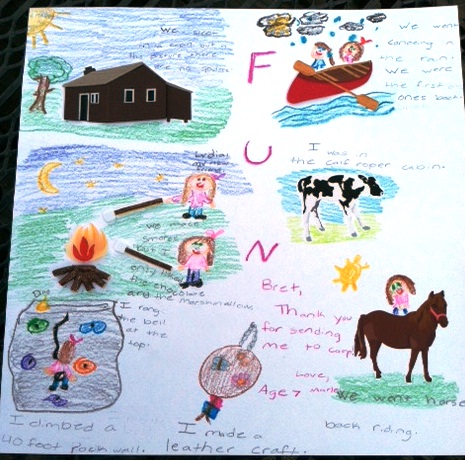 We were at Klipsch Music Center in Noblesville, IN. My wife suffers from RA, Fibromyalgia and Lupus. She has trouble walking very far and for very long. Myself and son walked around back to where Bret was riding his motorcycle in the parking lot, he stopped to take pictures with us and talked to us like he knew us all our lives. I told him about my wife and how disappointed she was going to be having missed him. When I mentioned it to my wife, she started crying and couldn’t believe she missed Bret.

Then much to our surprise, Bret sent Patrick to come out and get my wife, myself, my sons and my son’s girlfriend and brought us back to where Bret was. He took pictures with all of us and talked to us all. I want to thank Bret, Patrick and Janna for all they did. My wife still talks about it because it made her so happy. We hope to see you again. We talked to Patrick and Janna at Carb Day and they are both great people who really take good care of Bret on the road and are so good to his fans.

Thank you for all you do and take care! 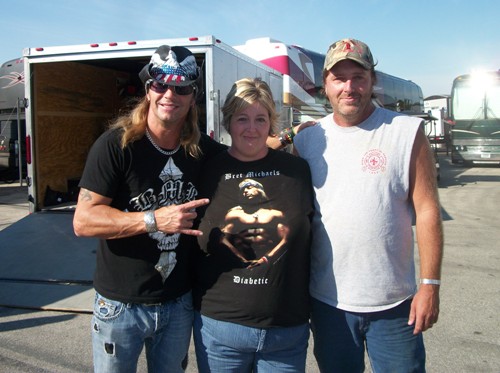 I am 42 years old and have been an RN for 21 years. Even longer than that, I have been an IDDM person for 32 years and on an insulin pump since 1991. I have a laundry list of other health issues, but my miracle and my faith to hold on is in my daughter, Shelby. My brother got that opportunity to meet Bret when they went on his tour bus. I use to volunteer for the ADA and was a volunteer nurse administrator for Camp Seal Harris, a camp for children and adults from1994-2009. Thank you Bret for all that you do, for your inspiration and love to all that helps make a load a little lighter! 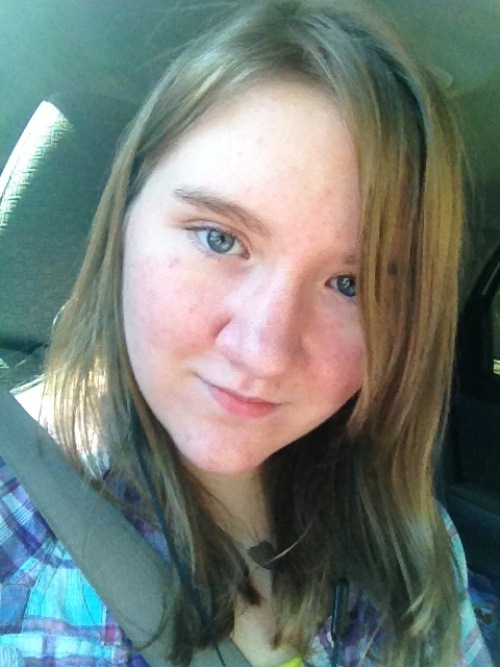 Addison listening to “Jammin With Friends” on the way to diabetes camp! 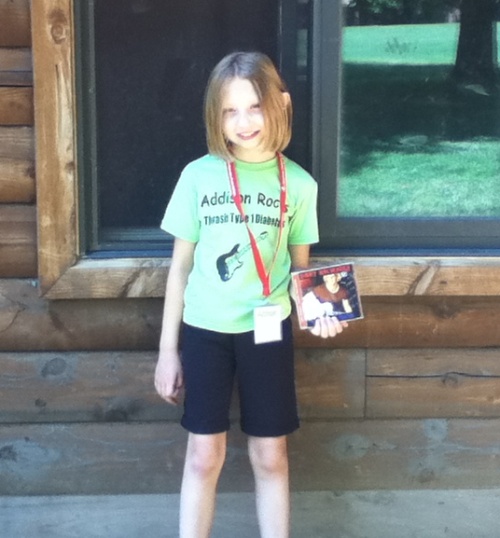 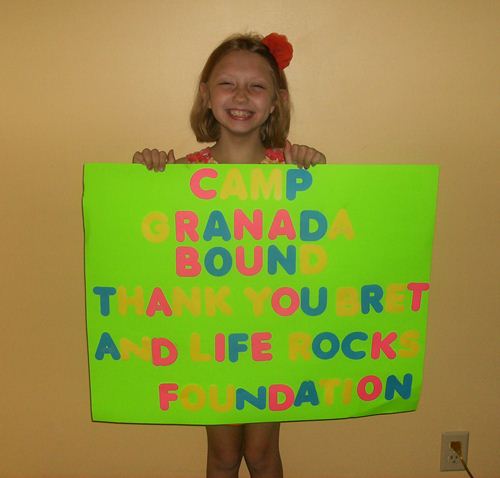 Last year I was in a bad motorcycle accident, shattered 3 vertebrae and my right leg. I was in a wheelchair for 4 months, had to learn to walk again and I’m still trying to heal. Pretty depressing year, but when you came to Dubuque, IA my best friend’s husband surprised us with passes to meet you because he knew I was a big fan, that was the best gift ever! 🙂

Can’t wait to see you again next year! 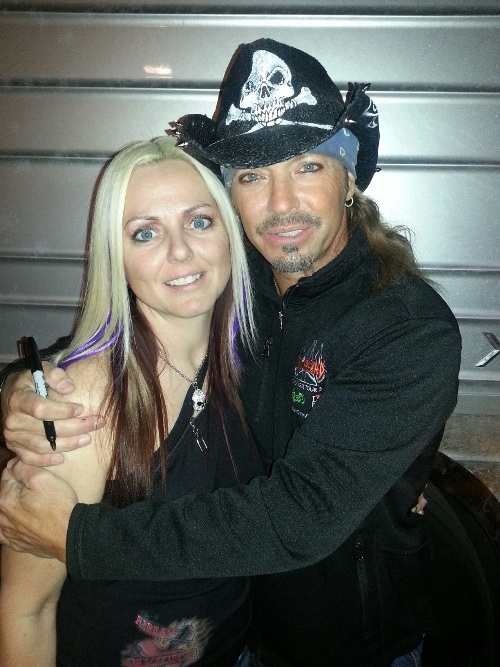