I wasn’t sure if I was going to share my story or not, but I find myself inspired to open up more and more thanks to Bret and the amazing women I have met because of him. I have been a fan since the fall of 1986, there isn’t a time in my life since then that Bret’s music hasn’t been there to help me through this crazy thing called life. This summer has been no exception. Going through difficult health issues I joined fan groups to meet other fans to help take my mind off of things, I had no idea how awesomely this would impact my life.

I was diagnosed with Hashimoto’s disease and would ultimately decide to have my thyroid removed, the surgery taking place just 3 weeks before I was going to PA to see the BMB. The week before the concert, I received a call from my Dr, I had made the right choice. One of the nodules removed had been cancerous, but with my thyroid gone, it was no longer an issue. As the concert approached, I was still recovering from the difficult and complex procedure. The muscles in the front of my neck had been cut and still caused me a great deal of pain. My voicebox had trauma, I was hoarse and couldn’t yell or sing. My face and lips would go numb and tingle, I had to take calcium supplements every other hour, about 15,000mg a day and the scary looking scar on the front of my neck added to my anxiety, my thyroid was so bad and oversized with nodules, they were unable to blend it into a crease in my neck.

My family and the amazing ladies in my group (I had started my own) were wonderful! I had even been brave enough to share a picture of my scar and they reassured me it wasn’t as bad as I had thought. It had been a rough go, but with the concert to look forward to and Brets Life’s Lessons still fresh in my mind, I pushed through, determined not to let it get me down. The day of the show, I had a 3 hour drive. From Baltimore to Reading by way of Sykesville to pick up my cousin, Dorie.

Spurred on by coffee and excitement, we arrived at Reverb at 2:30pm. I was super excited, not only to see Bret and the BMB (with new members Bart and Mike for their first show), but I was supposed to meet up with some of those great women. When Carrie arrived it was even kind of funny she was walking around looking at peoples necks to find me! It was like seeing and hanging out with an old friend and when her friend Elyse arrived, the 4 of us had a blast! (unfortunately, we were unable to meet up with Jenn and Randi, it was packed!)

The show was fantastic! Bret, Pete, Rob, Bart and Mike were awesome, what an introduction to the “new guys”!! Bret even went out of his way to give me a pick! He was playing and reached out to give me a pick and the person in front of me took it from his hand, he said “I’m sorry, give me a sec, I owe you one”. He went to the other side of center and played a bit and tried to give me that pick, again that person took it from his hand. He looked at me in disbelief and said “I’m so sorry, wait a sec”. He reached down and was out of picks! So what did he do? He said “I’m so sorry, I owe you one, gimme one second”, he started looking on the stage for a pick again apologizing and he picked one up, played his guitar with it for a few seconds then placed it directly in my hand, giving it a squeeze, still apologizing! It was so amazing, Bret going out of his way to do that!

After the show, I attended the meet and greet, where as always he is so kind and appreciative of his fans. Through the years, I have been blessed to meet Bret with and without Poison and he always has been so humble and amazing! This time I even braved taking with me a favorite poster I’ve had since 1987 and the look on his face and our conversation was unforgettable, as was the way he carefully folded it for me after he signed it. It was an amazing night, the kind one never forgets.

I have been blessed with many things in life and being able to be a fan of Bret and Poison and having their music touch my life for the last 28 years is one of them….here’s to 28 more! 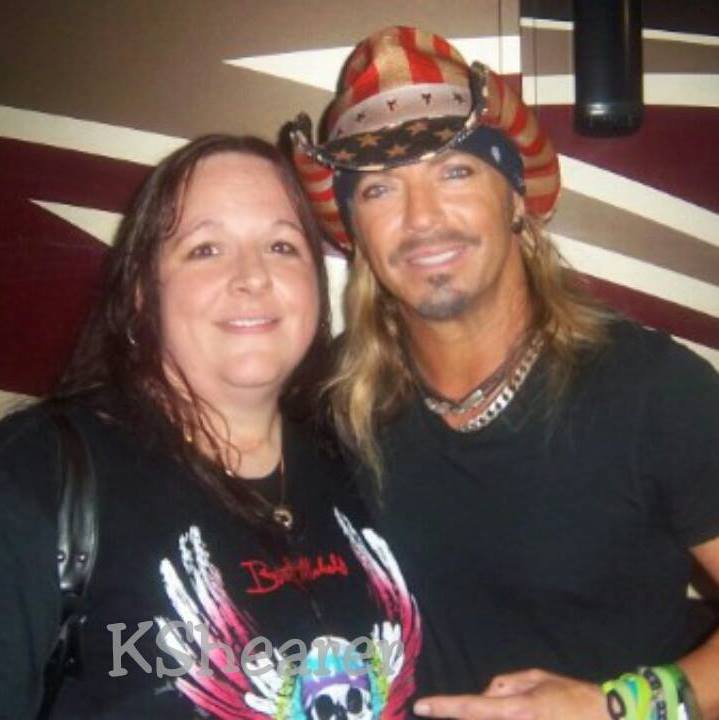