My name is Laura and this past August, my childhood friend Diane and I went to see
Bret in Obetz, Ohio. We had grown up loving Poison! We were recently reunited and
Diane just underwent a successful surgery for bone cancer so it only seemed right
that to celebrate we meet Bret together! The music from your youth always holds a
special place in your memories and Bret was a big part of those years for us. Even
more special to me now, Bret gives support to so many things that have touched my
life: diabetes, cancer, his love and support for our military men and women, and his
pet charities. My grandfather passed away due to complications from his diabetes, both of my grandfathers were in the armed forces, and I am thrilled to say that my mother is a breast cancer survivor! I also work in the veterinary field so the pet
charities make my heart incredibly happy and I have sent many pics of my dogs and
their Pets Rock toys in and thet were posted on Bret’s Facebook page! Thanks for
that! It’s been all the buzz amongst my coworkers at the vet clinic that my dogs are
famous because of Bret! In all seriousness, I do want to share a moment from the
concert in August. Bret had given my friend guitar picks for each of her children.
When he asked me if I had children, I sadly answered “no”. I didn’t give any details
other than that my husband and I were still trying and Bret must have sensed my
sadness and gave me a guitar pick for me and then he said, “and one for the baby to
come.” He has no idea how much that meant to me as we have had loss after loss. I
miscarried our first child, then twins, and last year had a tubal pregnancy. The
fact that I didn’t have to say anything more and he was so sweet to me without even
knowing about my broken heart. That meant the world. Just last week, only 1 month
after the show in Ohio, Diane and I drove from Ohio to Florida to see Bret at the
Hard Rock Hotel to kick off Pinktober in support of breast cancer awareness. Again
we did the Meet N Greet and I really wanted to give Bret something. Of course, you
are always so nervous to talk when you meet him so I didn’t get to fully explain the
meaning behind my gift. I felt like a bumbling fool trying to get the words out! LOL
I noticed he wears guitar picks on a few necklaces and I have a friend who makes
jewelery. I had a guitar pick from long ago when I attempted to play guitar. It was
black with a silver cross on it. I kept it all of these years. She was able to make
it into a necklace for Bret in the hopes that he would accept my small token of
thanks. He gave me a “guitar pick of hope” in August so I wanted to give him one
back. To me, the pick symbolizes hope and that “Something to Believe In” especially
after all that Bret has been through in his life as well. I was tickled to see that
it matched a few things in his wardrobe (He has a black hat with a silver cross on
it). He was so sweet to accept it and wear it during the show. I just wanted to
thank him for that even though I couldn’t spit out the meaning behind it. Though it
was a small gift, it was huge to me! I also want to thank him for all that he does
to give back to everyone, for his heart, for all of his charities, for his love for
his fans and for making us all feel so important, for his music that keeps us all
singing and dancing, for his inspiring stories of his struggles and overcoming, and
for his concern and kind words to my friend, Diane after her cancer scare, and his
kind words that made my broken heart smile and have hope! Thanks Bret! We love you! 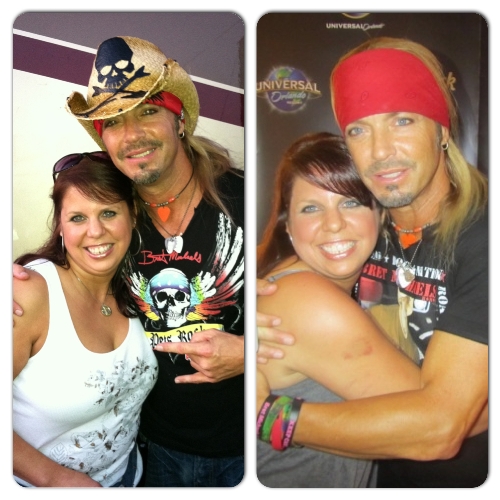