July 12th my cousin Nick, who is suffering from ALS, his wife Stephani and
their baby Nolan met Bret. It’s strange how the world works.. In May 2010 I
had brain surgery for a headache condition. It was right after Bret’s
aneurism.

Like Bret, I live in Az, so of course I went through Barrows
Neurological, the same doctors as Bret. I’d always wanted to meet Bret,
even more so after my surgery.

In November 2012, my son n I were listening to the John Jay n Rich morning radio show.  They were interviewing Bret and my son Colton called in and they put me on the radio live to talk with Bret.

He personally invited me to his show and to go back stage to meet him!! So on December 1st my dream came true.. I got to meet Bret w my sons.. He called me the next day and told me we’d keep in touch through Janna, his VP.

Because my cousin doesn’t have much longer to live, I thought it’d be awesome if I could get Bret to meet Nick.. Janna and I emailed for months trying to make it happen.. Unfortunately, Bret’s schedule was too crazy.. My cousin moved back to Spokane in March.

Then this May, I got an email from Janna that Poison would be in Spokane July 12th. We were able to set up a meeting with Bret and my cousin at Petsmart.. They were able to talk n take pics.. Nick said it was amazing!! It was a dream come true for a guy who won’t be on this earth much longer. Then they were able to go n enjoy the concert. It all came full circle.

From me suffering from Chiari malformation, having brain surgery with Bret’s doctors, a chance meeting on the radio, meeting Bret, being able to stay in touch, then having Janna set this all up for my cousin. Bret makes so many people’s dreams come true but this was extra special to me because Nick is in the end stages of ALS..

I’ll always b grateful to Bret and Janna for making something so special happen for my cousin!!!

Thank you so much!!!

Here is a picture from when they met.  This is Nick and Stephani holding Nolan. 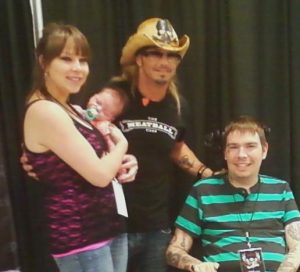 Here is Susie, Colt (next to Bret) and Cameron