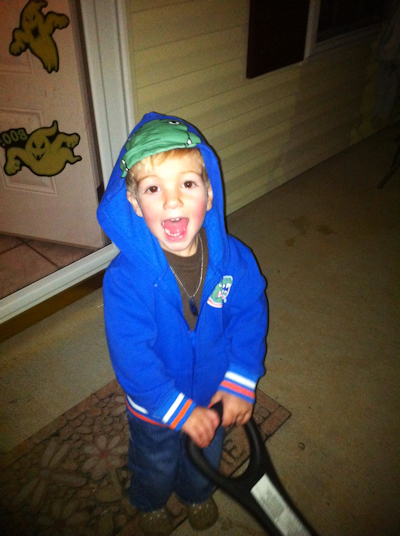 We were instructed to bring him back in 24-48 hours if he didn’t get better. I will never forget as it was super bowl weekend, he was extremely lethargic and his eyes were rolling back into his head and throwing up. I told my wife we had to take him back in.

We took him to Blanchfield Army Community Hospital, as I live right by Ft. Campbell after my disability separation from the Army. They tried to stick him with an IV on several occasions with no success. They called a female nurse (Michelle) over, who missed her first attempt, but noticed his breathing was irregular, so she had his blood sugar tested. She came back and told us their BG meter only went up to 500 and his was reading “HI”. Bottom line is, he was in DKA, with blood sugars above 1050. Nurse Michelle had explained to us that we were lucky we brought him in when we did because at that point he had less than an hour to live.

Because weather was so bad, the helicopter (med-flight) couldn’t fly that night, so he was transferred to Vanderbilt Children’s Hospital in Nashville TN, via ambulance, in critical condition, where he stayed in ICU for 2 days and an extra night for precautions. Seeing your child laying there in the hospital ICU, in a diabetic coma, hanging on for dear life, hooked up to tubes and wires is the most heart wrenching sight. Neither of us could sleep and were at his side reading to him, singing and praying he pulls through. During that time, my son had an angel watching over him; it was a miracle for what he had gone through, nothing else had happened.

It’s been a rollercoaster ride ever since then. He is now 2, and has become combative when it came to injections (4 xs daily) so we just recently started him on insulin pump therapy and so far it’s ok. His numbers are maintaining (100-200) and he is allowed to eat when he wants, not just breakfast, lunch, dinner and 1 snack. Try telling a toddler who doesn’t understand he is sick, looking in to his teary eyes and telling him “no you can’t have anything to eat; you have to wait until meal time”. (Because he was newly dx and on shots, it wasn’t recommended for me to try to give more insulin other than at meal time, he would go too low).

Because Jason’s BG had been going so low for a few weeks, a few days before his 2nd birthday, the result was him having a seizure, which is when his Dr. recommended pumping.

Jason is protective of his pump, and doesn’t want you to touch it, as he knows he needs it. However it makes for difficulty in site changes. My wife blames herself as type 2 runs in both of our families; I try to reassure her that it is not her fault. Some day’s we feel like giving up, but we know we have to be strong for our son. My wife holds this guilt with in and cries herself to sleep at night.

My son likes to play with other kids but it’s hard as other kids are freaked out by diabetes. I also found when he gets really active in play he goes low really quick so we try to limit his play a little, but he gets very upset with that.

One thing I noticed is that when you mention diabetes to people, they always assume you’re talking about type 2, and then they say well it’s your fault, and with proper exercise and eating healthy, it wouldn’t have happened….tell that to my 2 year old T1D.

T1D is different and is nobody’s fault, I just wish everyone else would get it, or when people are talking about diabetes in general, it needs to be clarified.