Dear Bret Michaels, thank you for the scholarship from your foundation for me to attend camp Needlepoint in Hudson, WI this summer. I had a fantastic time. I learned a lot, met lots of people that I still keep in touch with. It was a great experience and I’m very grateful for the opportunity that you have made possible, and I hope to attend again in the future and even become a counselor as I get older. These are a few of the MANY things I did at camp! 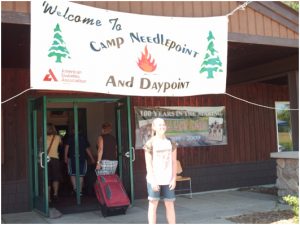 When I arrived at ADA Camp Needlepoint for the first time ever, I was amazed at what I saw. I pulled into a nice parking lot in front of a lodge that I would never had guessed was there. I checked in and found out that I was to stay in Village 3, along with 7 other campers, and 2 counselors. 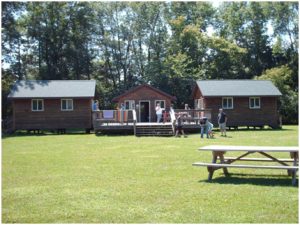 We finished checking in and exited through the other side of the lodge out onto what was known as “the A field”. We had no idea where we were or where to go. As we looked around, we saw a picnic table with 10 counselors waiting to help people. A counselor named Maggie took us down a trail, over a wooden bridge, through a 10 foot wide forest, and into a clearing. In the clearing there were 3 groups, the wranglers, the homesteader girls, and the homesteader guys. Me being a homesteader girl, I was in group 2. The groups were made up of a large deck, with 3 cabins (villages) connected to them. I was in group 2, village 3. My family helped me unpack, we said goodbye, and they were off to a parent meeting. I met my bunkmate, Jessie. She was the only other girl in our village except for the counselors; Steph and Nicole. I and Jessie talked and I found out that Jessie had only had diabetes for 1 year, 1 year to my 7 years. After a couple of minutes a girl named Madeline came in and said hi. She was the girl behind my bunk bed. Then Ali came in, then Kaija, Mackenzie, Taylor, Maci, Jane, and then Caitlyn.

I woke up and didn’t quite remember where I was… It only took about 2 minutes. Me and Jessie made some inside jokes as the day went along… Steve, Black Hat Guy, Bridge, Bob, Phil, Tall guy, and Michael Weston. The spiders are about 6” in diameter though… not the best feature! 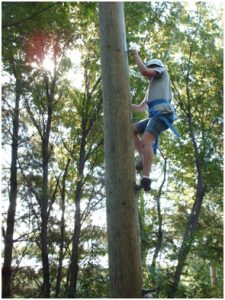 Today was scary and awesome!!! We did highteams! Highteams are like tightropes except its 30 feet up and you do it with a partner… a lot more difficult than anyone can imagine! I went canoeing for the first time today too! My canoe consisted of me, Jessie, (rookies) and Ali who does it almost every weekend. It was my first time, but Ali said that I did it like a pro, until I went low… that sucked! Tonight wasn’t very good… funny and weird. There was a very, very bad storm and we had to walk 2 miles back to the cabin… in pajamas!!! The people here are HILARIOUS!!!! Kaitlynn makes the BEST animal/weird sounds. The rain… well let’s just say you would’ve been drier swimming! 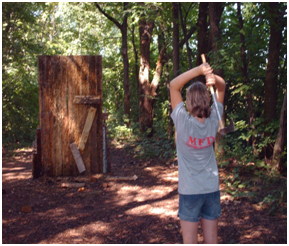 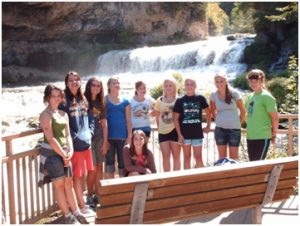 Today was fun… we threw hatchets! Me and Ali were the only people that actually hunted or got out of the cities! She was from a town with 15,000 people, and I’m from a town with 5,000 people. We both go hunting, so we were substantially better than the others. We made 5/5 each, while the others didn’t make any. 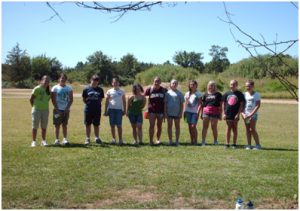 Today was awesome! We had a party out on the Field! The homesteader boys were there and we hung out with one named Andrew AKA ninja, pickles, Jungen, tiny, and young gun.