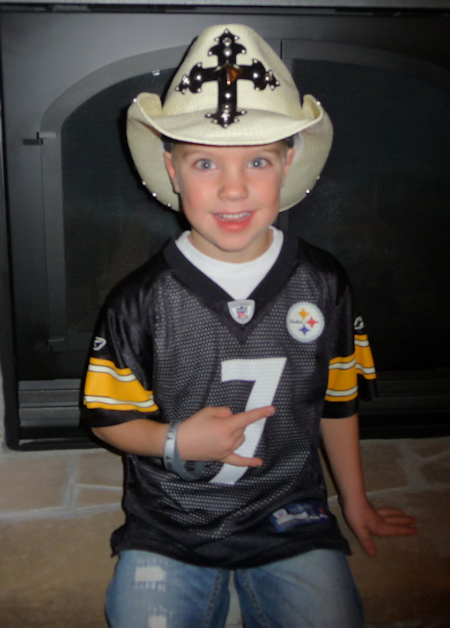 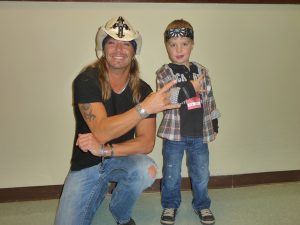 A year ago, our son, Carson (Type 1 Diabetic since age 4), had the amazing opportunity to meet Bret on his 5th birthday on November 5. Bret and the entire Bret Michaels group made quite an impression on Carson and our entire family. Carson continues to talk about Bret and has said that one of the things he wants to do when he gets older is be a rockstar! He still continues to say “Bret Michaels and I are going to STOP diabetes!”

So, for his 6th birthday which was last Saturday, November 5, we decided to get him a cowboy hat like the one Bret was wearing when Carson met him. He was ecstatic when he opened the gift! He also has a Steelers jersey because they are Bret’s favorite team. He had to also wear his bracelets just like Bret! Carson is now asking when he will get an electric guitar!!!!!

I have included two pictures of Carson wearing his hat and jersey along with the picture of Bret and Carson when the met a year ago.

Bret is Carson’s HERO and IDOL! What an impression he has made on him and our entire family!

Keep on doing what you are and thanks for all you do!! It means so much to these young Type 1 diabetics and their families!!